Former West Indies all-rounder Marlon Samuels after abusing Ben Stokes family has now targetted  former England captain Michael Vaughan. Taking to Instagram, Samuels trolled Vaughan on Twitter and boasted about the amount of money at his disposal, which according to him is something which Vaughan can never imagine to achieve. Stokes, who is currently playing in the IPL, recently spoke about the challenges and demands of staying in quarantine, joking that he wouldn’t wish it for even his ‘worst enemy’ Marlon Samuels. 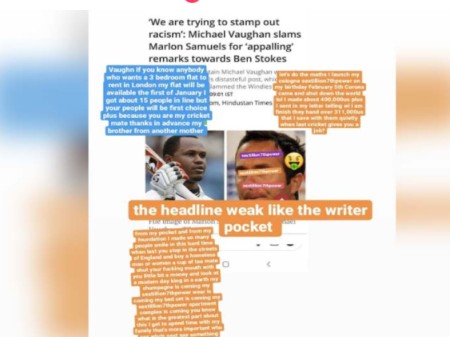 The Rajasthan Royals star had to remain in quarantine in hotel rooms in Auckland and Dubai in recent months as part of the terms of travelling during the Covid-19 pandemic.Samuel and Stokes have had on field spats in multiple occasions, which include the 2016 T20 World Cup final between West Indies and England.Samuels reacted to Stokes’ words and posted a derogatory post on Instagram. Former England captain Michael Vaughan was not pleased with Samuels’ distasteful post, which had racist remarks, and slammed the Windies batsman for his behaviour.Earlier, Vaughan had taken to Twitter and wrote, "This is appalling @marlonsamuels ... we are trying to stamp out racism ... !! A bit of banter by @benstokes38 should not lead to this ..."