West Indies all-rounder Marlon Samuels has once again renewed his rivalry with Ben Stokes when he slammed the English ...

West Indies all-rounder Marlon Samuels has once again renewed his rivalry with Ben Stokes when he slammed the English star for his rather light-hearted, quarantine remark on him. Stokes, who is currently playing in the IPL, recently spoke about the challenges and demands of staying in quarantine, joking that he wouldn’t wish it for even his ‘worst enemy’ Marlon Samuels. The Rajasthan Royals star had to remain in quarantine in hotel rooms in Auckland and Dubai in recent months as part of the terms of travelling during the Covid-19 pandemic.
“I posted a few Instagram stories and some of the England boys were messaging me asking what it’s like and I was saying it wasn’t the most enjoyable thing you ever have to do, I wouldn’t wish it on my worst enemy,” Stokes recently told the TMS in an IPL podcast.“ I text my brother saying the same thing, and my brother asked: ‘You wouldn’t even do that to Marlon Samuels?’ I said ‘no, it’s that bad’ – that’s how tough it was,” he had added.

Although the comment is supposedly in jest, it has not gone down well with Marlon Samuels who abused Stokes, as well as former Australia legend and current Rajasthan Royals mentor Shane Warne on Instagram by stating, “no white boy could diss me in the sports and no get back diss look at this b*tch still thinking about me give me 14 days with you wife turn har into Jamaican in 14 seconds mate none of yall knows me that simple means it’s my f***ing superior skin tone. icc cricketing world ben b*tch stokes Shane b*tch warn and a few b*tch west Indians cricketers who sell out sextillion7thpower Ps nothing to f*ck with my army bigger and we richer,” Samuels wrote in an expletive-ridden tirade. 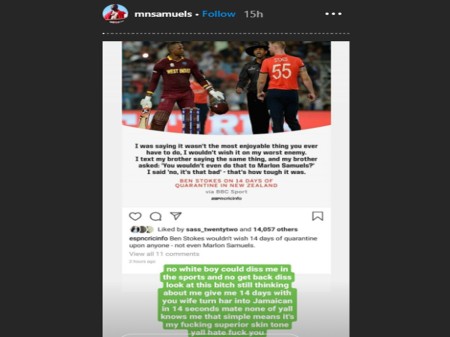 Former England captain Michael Vaughan reacted to Samuels’s comments and expressed shock at the use of his words. The rivalry between Marlon Samuels and Ben Stokes goes back a long way when in 2015 the former mocked the Englishman with a salute. The pair once again clashed at the T20 World Cup final in 2016 when West Indies defeated England. Marlon Samuels has shared a bitter rivalry with both Shane Warne and Ben Stokes. The rivalry with Warne was ugly during his time with the Big Bash League while playing for Melbourne Renegades. Warne, playing for the Melbourne Stars, grabbed Samuels’s shirt and the duo were seen engaging in a heated confrontation. At one point, Samuels almost threw a bat at Warne.