Veteran journalist Rajat Sharma has resigned from the post of Delhi and Districts Cricket Association citing his inability to continue amidst various pulls and pressures within the organisation. Sharma who held the office for a period of 20 months had a very controversial stint at the helm due to his public differences with general secretary Vijay Tihara. Sharma had joined cricket administration after he received full support from former finance minister Arun Jaitely.

According to DDCA insiders, Sharma lost his ground after the demise of Jaitely who is known to have a strong hold in the Delhi cricketing circles. In a statement Rajat Sharma was quoted as saying, "In my endeavour though I faced many road blocks, opposition and oppression, just to keep me from discharging my duties in a fair and transparent manner that is why I have decided to call it a day and hereby tender my resignation to the Apex Council from the post of President DDCA with immediate effect." 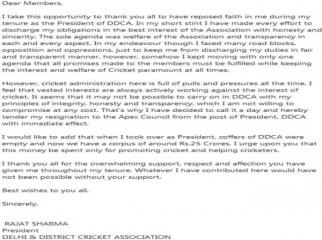