Shikhar Dhawan meets his son Zoravar after his divorce with Ayesha Mukherjee English.Lokmat.com

Last week, Shikhar Dhawan was making headlines for the wrong reasons. The dashing India opener and his wife of ...

Last week, Shikhar Dhawan was making headlines for the wrong reasons. The dashing India opener and his wife of eight years Ayesha Mukherjee had divorced. Ayesha Mukherjee, a Melbourne-based Bengali, posted a long emotional Instagram post on Tuesday to reveal her separation with the left-handed Shikhar Dhawan. Ayesha, 46, has now become a two-time divorcee. Ayesha and Shikhar Dhawan have a son, Zoravar, who is seven. Shikhar who is in UAE currently for the IPL recently met his son on video call. The Delhi opener shared a Instagram story and wrote, 'Best part of my day.' where the father son duo can be seen sharing a light moment. 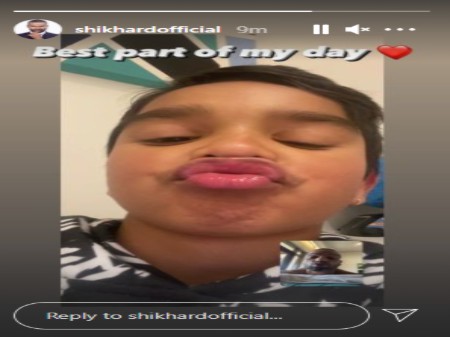 Shikhar and Ayesha got married in 2012. Both met on social media and fell in love, but the cricketer's family was initially against their marriage as Ayesha was a divorcee and had two kids out of her first marriage. Later, they agreed. The announcement of their separation was made by Ayesha through her Instagram account wherein she penned a long post. She wrote, "I THOUGHT DIVORCE WAS A DIRTY WORD UNTIL I BECAME A 2 TIME DIVORCEE." In the same post, Aesha added that one can give their own meaning and experience to the word. She jotted down her interpretation of divorce. "Divorce means choosing myself and not settling and sacrificing my own life for the sake of a marriage. Divorce means even though you do your best and try your best things sometimes do not work out and that's ok. Divorce means I have had amazing relationships that have taught me great lessons to carry forward in new relationships. Divorce means I am stronger and more resilient than I ever thought. Divorce really means whatever meaning you give to it," part of Aesha's long post reads. Meanwhile, Dhawan kept mum on this issue. Ayesha Mukherjee is a former kickboxer and is based out of Melbourne, Australia. She has a reputation for playing in both national and international levels. Ayesha Mukherjee, before Shikhar Dhawan, was first married to an Australian businessman. The couple had welcomed their first child in 2000 and named her Aliyah. They welcomed another daughter named Rhea in 2005.