Kim Sharma recently shared a post celebrating the completion of 25 years since her rumoured boyfriend Leander Paes won a bronze medal in tennis at the Olympics. Sharing a throwback picture of Leander, Kim wrote: "Congratulations on 25 years of your Olympic medal champ @leanderpaes #flyingman."Kim and Leander have been rumoured to be seeing each other and the couple have been spotted enjoying each other's company multiple times. Last month, a restaurant-bar in Goa sparked rumours of Kim and Leander dating by sharing a picture of them enjoying a meal together. 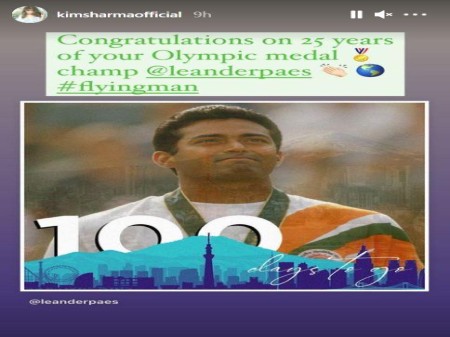 Another photo showed him hugging her from behind as they posed on the beach. Later, she shared a picture on Instagram, which appeared to have been taken the same day, and credited ‘Mr P’ for it. Kim was previously in a relationship with Harshvardhan Rane but the couple broke up in 2019. On the work front, Kim made her acting debut with Mohabbatein in 2000. Post that she appeared in a few movies including Fida and Taj Mahal: An Eternal Love Story. Leander, too, has dabbled in films. He made his Bollywood debut in 2013 with Rajdhani Express. He and his former doubles partner Mahesh Bhupathi will be the subjects of a Zee5 series directed by filmmakers Nitesh Tiwari and Ashwiny Iyer Tiwari. Leander, was previously married to model Rhea Pillai and the former couple have a daughter together.