Rhea Chakraborty, who has been arrested in the drugs case in connection with Sushant Singh Rajput's death, had reportedly ...

Rhea Chakraborty, who has been arrested in the drugs case in connection with Sushant Singh Rajput's death, had reportedly shared Sara Ali Khan, designer Simone Khambatta and Rakul Preet Singh's names with the NCB. While the case seems to be getting complicated with each day, a Times Now report had also suggested that Rhea and her brother Showik Chakraborty had reportedly revealed a list of nearly 25 names in connection to the drugs ring in Bollywood. 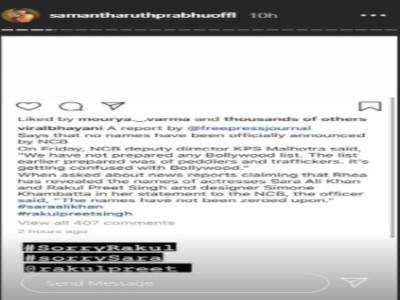 However, recently NCB’s director KPS Malhotra has dismissed the reports stating that they have made no such list of Bollywood celebs. Now, numerous celebs and other conscious individuals have reacted to the same. Among them is Samantha Akkineni who has now shared a few posts on her Instagram handle while expressing her opinion on the same. She also writes #SorryRakul and #SorrySara along with the same as a note of apology to both the actresses who were subjected to backlash because of the fake reports.

Earlier, KPS Malhotra said, “We have not prepared any Bollywood list. The list earlier prepared was of peddlers and traffickers. It’s getting confused with Bollywood. The names have not been zeroed upon.” Meanwhile, Rhea Chakraborty remains in prison as her bail plea has been rejected by the court. Earlier, the actress had stated in her plea that the NCB coerced her into making incriminating statements during the interrogation.