Sanjay Dutt and Manyata are one of B-town's most adorable couples the duo have  gone through a lot of ...

Sanjay Dutt and Manyata are one of B-town's most adorable couples the duo have  gone through a lot of ups and downs in the marital life. Maanayata Dutt took to her Instagram stories to post a video of Sanjay Dutt and their son. In the video, we can see both Sanjay and his son holding a stick and limping while they walk towards the camera. Maanayata wrote, “Father and son on the road to optimal recovery”. Going by the pic it looks like the father son duo are recovering from a injury. Sanjay can be seen wearing white jeans and a blue shirt. His gold chain was dangling around his neck, and white sneakers adding to his look. 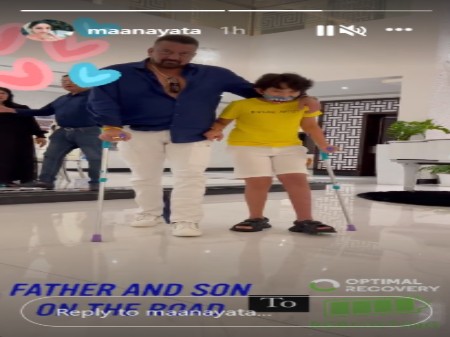 Their son was smiling from behind the mask, and he, too, wore white shorts along with a yellow t-shirt. On the work front, Sanjay Dutt has an array of films in his kitty. He will be seen next in KGF: Chapter 2. Directed by Prashanth Neel, the film also stars Yash, Raveena Tandon, Srinidhi Shetty, Prakash Raj and Malavika Avinash. While Yash plays the role of Rocky, Sanjay will essay Adheera. Recently, Yash took to his social media to inform his fans that the movie will be released in the theatre on April 14 2022. Apart from this, the actor also has Akshay Kumar’s Prithviraj, and Ranbir Kapoor's Shamshera