Actor-singer Divvya Chouksey died on Sunday after a year-and-a-half long battle with cancer. She was 28. The young actress ...

Actor-singer Divvya Chouksey died on Sunday after a year-and-a-half long battle with cancer. She was 28. The young actress died in her hometown and a night before her death, Divvya wrote on her Instagram Story that she was on her "deathbed"."Words cannot suffice what I want to convey, the more the less... Since it's been months am absconded and bombarded with plethora of messages, it's time I tell you guys, I'm on my deathbed. "Sh** happens, I'm strong. Be there another life of non suffering. No questions please, only god knows how much you mean to me," she wrote.

According to news agency PTI, Divya Chouskey’s debut Hai Apna Dil Toh Awara director, Monjoy Mukerji stated that her cancer relapsed a few months back. He revealed, "She was suffering from cancer for about one-and-a-half years now. She got cured, but it relapsed after a few months. Divya Chouksey’s Hai Apna Dil Toh Awara co-star Sahil Anand took to his social media and shared an emotional post for the actor. He wrote that he will miss her and that he is sure that she is in a better place now. Kundali Bhagya actor Anjum Fakih also shared her condolences on her social media. She shared a video of Divya Chouksey and also shared a few pictures of the actors together. She penned down a heartfelt note for the actor and mentioned that she was 'too special' to be missed. 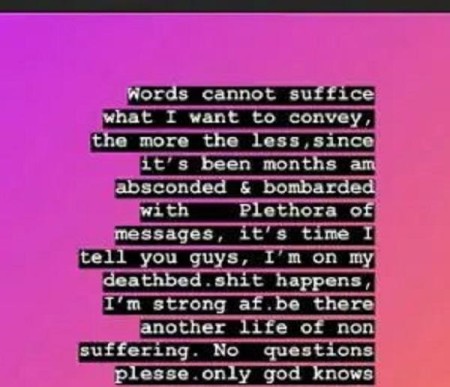