Zaira Wasim who rose to fame with films like Dangal and Secret Superstar has landed in a new controversy ...

Zaira Wasim who rose to fame with films like Dangal and Secret Superstar has landed in a new controversy after she quoted a verse from the holy book of Quran justifying he ongoing locust attacks in India. Zaira's social media post attracted widespread attention and twitter users bashed the actress for her insensitive comments at a time when several states in the country are facing abnormal locust attack and have been placed under high alert. 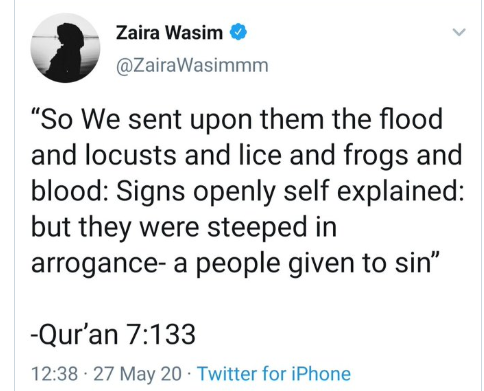 Soon after receiving backlash, Zaira deleted her tweet that read, “So We sent upon them the flood and locusts and lice and frogs and blood: Signs openly self explained: but they were steeped in arrogance- a people given to sin - Qur’an 7:133.” Meanwhile, she has also deleted her Twitter and Instagram account after the controversial post.  The young actress was last seen in  The Sky is Pink with Farhan Akhtar and Priyanka Chopra. Check out some of the reactions by netizens here...

Even the quality education of modern times couldn’t cure the bigotry of these Neanderthals! https://t.co/sD0C0GGRPs

If one wonders how does a millenial who was offered an opportunity in uber cosmopolitanism, end up with so much bigotry and hate, she is mentioning the source also. pic.twitter.com/k3FOZrRvub

Well She just used a Quran's verse to Justify Locusts attack on a country which offered her an opportunity in cosmopolitan city. I will again say, The Source of Hate & bigotry is something else, Education and Secularism can never become the answer to radical Islamism. https://t.co/rPsbnBlvDg