"End of an era": Celebs and world leaders mourn the death of Prince Philip

Prince Philip, the longest serving royal consort in British history and a constant presence at Queen Elizabeth II's side ...

Prince Philip, the longest serving royal consort in British history and a constant presence at Queen Elizabeth II's side for decades, died Friday aged 99, Buckingham Palace announced. The death of the Duke of Edinburgh is a profound loss for the 94-year-old monarch, who once described him as her "strength and stay all these years". He was admitted to hospital on February 16, and went home after a month during which he was treated for a pre-existing heart condition and an infection. Messages of condolences have been pouring in from all sides on social media. Bollywood actors like Aftab Shivdasani, Pooja Bhatt, Saba Ali Khan and many others took to their social media handles to express their condolences. 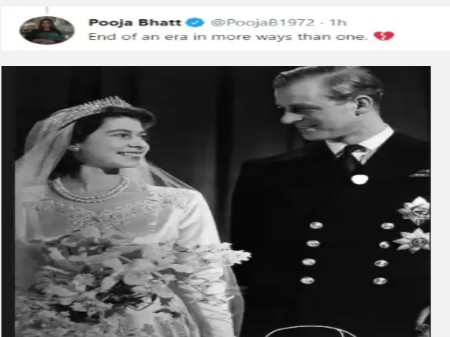 Prime Minister Boris Johnson said Philip "earned the affection of generations here in Britain, across the Commonwealth and around the world.'' "We give thanks, as a nation and a kingdom, for the extraordinary life and work of Prince Philip, Duke of Edinburgh," Prime Minister Boris Johnson said outside 10 Downing Street. Johnson said Philip had "earned the affection of generations" at home, in the Commonwealth and across the world after first serving in the Royal Navy and then over nearly eight decades beside the queen. Announcing his passing, BBC television played the national anthem over a picture of Philip in his prime, dressed in military dress uniform. Philip retired from public duties in 2017 at the age of 96. His death came just months before his 100th birthday in June -- an event typically marked in Britain with a congratulatory message from the queen, who is now Britain's longest-serving monarch.

On the death of HRH The Prince Philip, Duke of Edinburgh. pic.twitter.com/rZlbY1matF

My thoughts are with the British people and the Royal Family on the passing away of HRH The Prince Philip, Duke of Edinburgh. He had a distinguished career in the military and was at the forefront of many community service initiatives. May his soul rest in peace.