On September 9, The Shiv Sena-controlled Brihanmumbai Municipal Corporation (BMC) demolished the "illegal alterations" at the Bandra office of ...

Kangana Ranaut had moved to Bombay High Court against demolition of her Bandra office in Mumbai on the same day.

On September 15, actress amended her petition before the court and demaned Rs 2 crore  damages should be paid by BMC following the unlawful demolition of a part of her office.

The Brihanmumbai Municipal Corporation on Friday asked the Bombay High Court to dismiss actor Kangana Ranaut’s petition seeking Rs 2 crore in damages for demolition of her bungalow in Mumbai. The BMC called Ranaut’s plea an “abuse of the process of law”.

Kangana shared a Supreme Court case verdict on her Instagram story where rules regarding demolition were mentioned. The message that she shared explained that in case of demolition as per the Mumbai Municipal Corporation Act 1888, it can only be done by giving a person a 15 days notice. It further claimed that if the Municipal Corporation violates the process while demolishing a building but the structure is totally illegal, some compensation can be awarded. Further, it stated that the compensation can be claimed by the officers who have violated the law.

Sharing this on her Instagram story, Kangana wrote, "A special message for Maharashtra govt and its pet BMC." 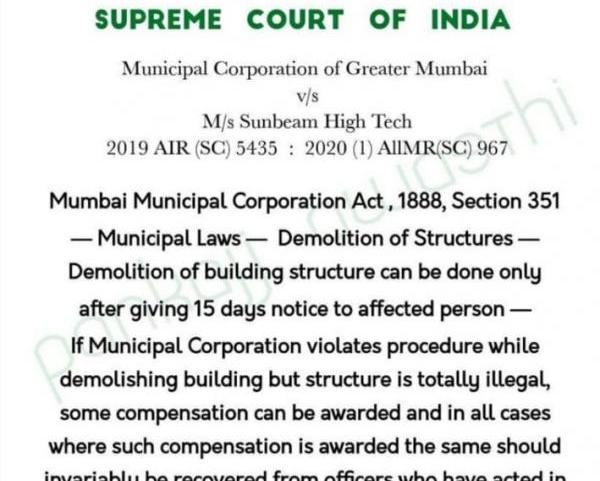