MNS determined to celebrate Dahi Handi this year amid covid-19

Due to the Coronavirus crisis, all festivals and celebrations in Maharashtra have been banned since last year. Dahihandi was ...

Due to the Coronavirus crisis, all festivals and celebrations in Maharashtra have been banned since last year. Dahihandi was also not celebrated due to covid last year. But this time, Maharashtra Navnirman Sena seems determined to celebrate Dahihandi in any case. Because MNS leader Abhijit Panse has announced this on his Facebook page. Abhijit Panse has said in the post that he will celebrate the world record Dahihandi on 31st August. He has also mentioned the name of Thane district president Avinash Jadhav.

It is being said that MNS intends to celebrate Dahihandi by following all the rules of Corona. Many mandals have also been appealed for this. "Come together to join the Dahihandi festival with both doses of Corona vaccine and celebrate your Marathi festival," appealed Abhijit Panse. Due to this decision of MNS, now there is a lot of discussion in the state.

Thane district is popular for Dahi Handi celebrations. Dahihandi squads arrive in Thane from various districts like Mumbai, Thane, Palghar, Nashik. But Dahihandi was canceled last year due to a corona outbreak. Due to this, there was a lull in Thane district. But now the discussion has started once again on the role of MNS. It will be important to see what role does the state government and the police will play. 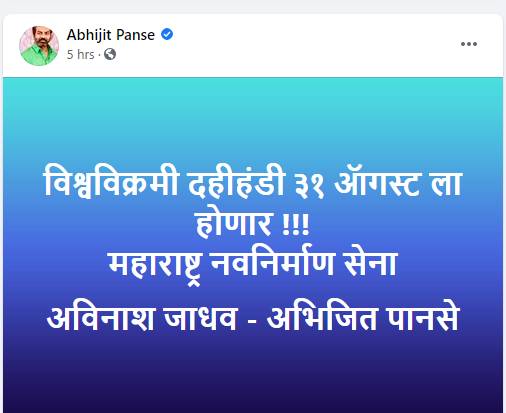