Fruits of the Budget must reach the common man

The pandemic has picked everybody’s pocket and ruined the economy. Let’s nurse a hope for a better future

The common man has nothing to do with the fancy Budget figures. His only hope is that the Budget fulfills his basic needs and makes life easier. Last year has been very difficult for everyone. The Budget should be such that its benefits reach the common man.

Preparing this year’s Budget must not have been an easy task because the pandemic has ruined the country’s economy. Industries which have been stagnant for months have still not recovered. Crores of people have not been able to get their jobs back and the job situation is in bad condition. It is obvious that the expectations of every household rest on the fact that the magic pen of Modi ji should show up in the Budget so that the struggle of life is reduced. They hope that at least there is no shortage of livelihood, education and healthcare of children.

In about a few hours, Union finance minister Nirmala Sitharaman will be presenting the Budget in Parliament and the whole country will be listening to her as to what comes out of her suitcase this time. I know that this time there is a major crisis in front of the government as well. The availability of funds has its limitations but then the government is there so that it can provide comfort to its countrymen in difficult circumstances, reawaken their confidence that the government they have elected has the skills to get them out of the economic crisis.

I hope that while preparing the Budget, Nirmala Sitharaman and her team must have taken care of every need. If there is something missing in it, then it is the responsibility of every MP to help the government in meeting that deficiency and the government should also keep its mind and heart open and accept the suggestions, even if those  came from an Opposition MP. Besides, intensive discussions should also be held with experts from different fields. After all, everyone’s goal is to take the country forward!

As a journalist, I keep in constant touch with the common man and understand his needs. The problems that ordinary people had to face during the coronavirus pandemic are extremely important and should be resolved through the Budget. First of all, there is an urgent need to reassure the common man. Everyone will agree that the pandemic has picked everyone’s pocket whether it be a professional, a hawker or a shop-owner or an industrialist! The poor financial condition of industries led to a huge reduction in jobs. Therefore, it is important that the government facilitates the way for industries as well as MSMEs which create jobs and employment on a large scale. If the industry thrives, jobs will flourish and employment will increase. 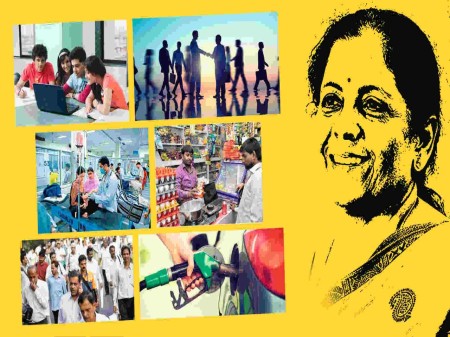 Those who have survived the axe in the private sector are facing pay cuts. Earning is on decline. In such a situation, it is the desire of the people to get a rebate in income tax especially to those who have been victims of coronavirus and had to spend huge amounts in hospitals. Along with this, there is a need to control inflation. Whatever be the government’s data, but the reality is that the prices of everything from cereals to cooking gas have increased rapidly. Petrol and diesel prices have been skyrocketing. With the increase in the price of diesel, there is a sharp rise in inflation. After all, whose responsibility is it to give relief to the common man? It is that of the government itself! How can the government avoid this? The construction sector is also in bad shape. Cement and iron  prices have gone up significantly. It is obvious that buying or building a house has become very expensive for anyone. When the houses are not built, where will the workers get employment from? The government should pay attention to the fact that the steel industry and the food sector have made huge money. It is amazing that despite the bumper yield of  crops, the prices of food grains are continuously rising. Unless inflation is controlled, the common man will continue to suffer...And the biggest need is to improve the health of the country. During the epidemic, our health system has proved to be quite ineffective. If we talk about Maharashtra in particular, the Economic Survey of the Central government tells us that Maharashtra has proved to be incompetent in fighting Corona. If this was wrong then why did the MPs of Maharashtra not raise their voice? However, this is a thing of the past. Keeping in mind of the future, rapid and meaningful steps will now have to be taken to improve the health services. You will be surprised to know that India spends only 1.4 per cent of its GDP on health services while it is 6 per cent globally. Now, it is imperative that the Budget has adequate provisions  for government hospitals so that they are capable of meeting the growing demands. In the 2017 health policy, the target was set that by 2025, 2.5 per cent of GDP will be spent for health services, but after this epidemic, the government should reset the target. What a shame that we are ranked 120th in the list of 159 countries in the global ranking of access and quality of health services. Even, Sri Lanka, Bangladesh and Nepal are above us in this ranking. We should hope that the government will present  proper solution for all these problems in this Budget.