Why not one election when nation is one?

Till 1967, the assembly elections were held simultaneously with the Lok Sabha, but politics changed this system

The Prime Minister has spoken about the advisability of ‘one nation one election’. This is right too. Why shouldn’t this happen? It may not be in the interest of politics but it is in the interest of the country. India’s democracy is very strong and the voters of this country have proved from time to time that India is more powerful than the United States vis-a-vis democratic values. Whenever the ruling party has lost polls, it has not stayed a minute longer in power. Today we see how Trump is behaving in America. It is said that the people of India are not very educated. They may not be educated like America, but our people are undoubtedly very intelligent. People of India know when to take a decision. Our democracy is very mature and capable of realising the idea of one nation one election. No doubt, the democracy and dignity of the tricolour of this country will always be upheld. If we look back, our founding fathers while drafting the Constitution would not have even imagined that there would be a time when electoral activities would always be going on in some part of the country or the other! Now see, Bihar Assembly elections and bypolls in some states across the country were completed only recently and the preparations to hold elections in four other states and one Union Territory have already started. In 2021, elections are due to be held in West Bengal, Assam, Tamil Nadu, Kerala and Puducherry. 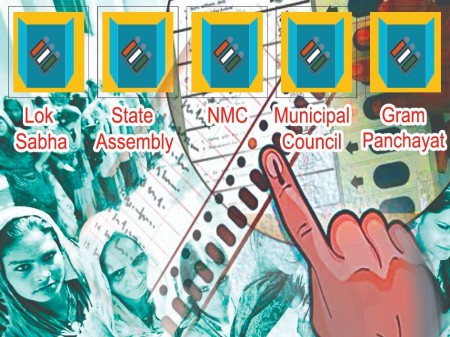 Elections will be held in Uttar Pradesh next year, i.e. 2022. Due to elections, there is a model code of conduct in force. Development work is at a standstill. The system is ruined. People get upset. The question therefore, is bound to be asked as to why there can’t be ‘one nation one election’ system? This is not a new concept! Right from the first elections held in 1951-52 to 1957, 1962 and 1967, elections were held simultaneously for the Lok Sabha and the state assemblies across the country. The disruption came in 1968-69 when the legislative assemblies of some states were dissolved prematurely. After this, the Lok Sabha elections scheduled to be held in 1972 were held an year before in 1971. Thus, the system was disturbed and it went on deteriorating. In the year 1999, the Law Commission suggested in its report for the first time that elections to the Lok Sabha and Vidhan Sabha should be held simultaneously. After this, in 2015 the Parliamentary Committee on Law and Justice also recommended to hold the elections simultaneously. Prime Minister Narendra Modi also convened an all-party meeting in June 2019 but no consensus was reached. The Congress deferred the proposal by saying that it would express its opinion only after talks with regional parties and its allies. This case has been hanging fire since. I know that every party takes care of how it benefits when it is in power. That is why the opposition parties are skeptical, but it is secondary because simultaneous elections are in the public interest.

Let us now look at the election expenses. In the first election of 1951-52, about `11 crore were spent. In the last Lok Sabha election, this figure reached about `60,000 crore. Apart from this, the amount of black money spent is beyond estimation. It is far more than the official figure, yet it is difficult to say anything about it. The reason for this is that crores of rupees are spent in fighting elections, while the spending limit is extremely low. The spending limit should be realistic. Just imagine the cost of holding elections to different legislative assemblies? That is why, not only Lok Sabha and Vidhan Sabha but the elections to the municipal corporations, municipal councils, Zilla Parishads, Zilla Panchayats and even Gram Panchayats should also be held simultaneously. Our Election Commission has proved its ability to work with the bureaucracy, police and paramilitary forces. The commission will also fulfil this obligation. Our technological progress is also such that the result of elections comes in a day.

Some people say that simultaneous elections will harm the democracy. They argue that if an assembly is dissolved in between? If there is a need to hold elections? Many more such questions are thrown up, but my opinion is that if political parties sit together and discuss this serious issue deeply, the answer to every question can be found. Some people also say that voters can be influenced in such a system and they may vote for the same party at the Centre and the State. I do not believe this. The example of Odisha is in front of us where people voted for one party at the Centre and another party in the state. I will tell you about Aurangabad in Maharashtra. Once, veteran Congress leader Abdul Rahman Antulay contested the Lok Sabha poll and Rajendra Darda contested the assembly election. Antulay lost but Darda won. That is why I say do not distrust the voter! ‘One nation one election’ is not the imagination of Narendra Modi alone. It is also what the common voter of this country wants. All political parties should rise above party consideration and give new direction to the world’s largest and greatest democracy. This is the demand and the need of the hour! And yes, one thing that I want to say to the Election Commission is that millions of our paramilitary and military personnel are deprived of exercising their franchise. This is the era of technology. There should be some system where they too can cast their vote during elections.