4-year-old brings home baby deer after venturing in the woods for outing English.Lokmat.com

In a unique incident, a four-year-old boy did the unthinkable after he returned home from his playtime. Dominic who ...

In a unique incident, a four-year-old boy did the unthinkable after he returned home from his playtime. Dominic who stays in Virgina turned up at the doorstep with his new friend which left his parents visibly surprised. . The kid’s mom, Stephanie Brown was at loss of words when his son, Dominic returned with the animal. The Brown family was on a brief getaway in Massanutten Resort, Virginia. Dominic made the discovery in the bush on the last day of the trip when the family was planning to return home to Virginia's Northern Neck. Stephanie heard footsteps when she was taking things out of the refrigerator. When she turned around, she was surprised to see her son and the baby deer standing next to each other, feeling comfortable. 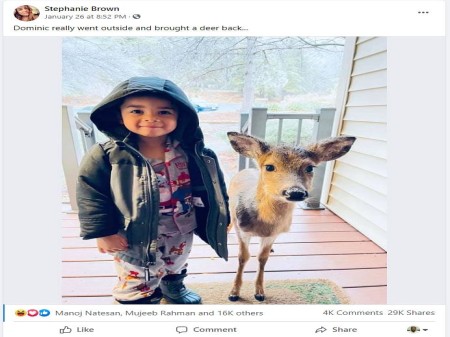 She froze for a second because the boy befriended a baby deer outdoors and she didn’t know what to do. Stephanie quickly recovered her composure and grabbed her phone to snap a photograph of the two together that she later posted online. Stephanie took to Facebook to share the beautiful moment caught on camera with the world. Brown told WWBT, she asked Dominic to walk the deer back into the woods so that its mother could find it. She said she did not move her eyes off of them. Dominic named his new friend, “Flash,” the superhero, to acknowledge the pair’s brief encounter. The boy told his mother that the deer was by itself when she asked where he found it. Stephanie said that her son wanted to give it cereal to eat. Stephanie said that Dominic and the baby deer looked like it was an everyday occurrence and nothing out of the ordinary so it was very precious. Since being shared, the picture has gone viral on social networking sites