PUBG Mobile to stop working for users across India from Oct 30, 2020

PUBG Mobile will stop working for all users in India from today, the game developers announced in a Facebook ...

PUBG Mobile will stop working for all users in India from today, the game developers announced in a Facebook post.

"Dear Fans, To comply with the interim order of the Ministry of Electronics and Information Technology dated September 2, 2020, Tencent Games will terminate all service and access for users in India to PUBG MOBILE Nordic Map: Livik and PUBG MOBILE Lite (together, “PUBG Mobile”) on October 30, 2020. The rights to publish PUBG MOBILE in India will be returned to the owner of the PUBG intellectual property. Protecting user data has always been a top priority and we have always complied with applicable data protection laws and regulations in India. All users’ gameplay information is processed in a transparent manner, as disclosed in our privacy policy. We deeply regret this outcome, and sincerely thank you for your support and love for PUBG MOBILE in India."

PUBG Mobile is no longer available to download for the Android and iOS users in the country.

PUBG was banned on an order by the Ministry of Information and Technology (MeitY), which also banned 117 other popular apps from China over national security concerns.

In June, 59 apps were banned including TikTok and another 47 apps were suspended in July. 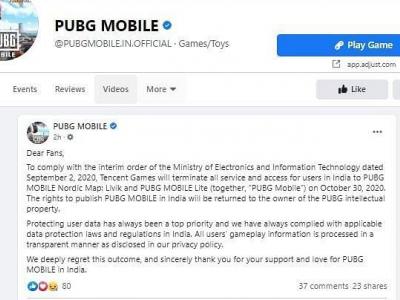