Tamil actress Raiza Wilson who took to social media to report the horrible facial treatment metted out to her ...

Tamil actress Raiza Wilson who took to social media to report the horrible facial treatment metted out to her by a dermatologist. The former big boss contestant, accused her doctor for allegedly ‘forcing’ her into a surgery that has left a major swelling under her right eye. Raiza also claimed that she ‘did not need’ the surgery yet her dermatologist forced her to perform the procedure on her skin. Raiza further added that she tried to contact the doctor but she was unavailable. Raiza mentioned that she had gone to the doctor for simple skin treatment but the doctor forced her into a complicated surgery through manipulation. The doctor’s staff responded to her by saying that the doctor has left the town without any concise information of being back. 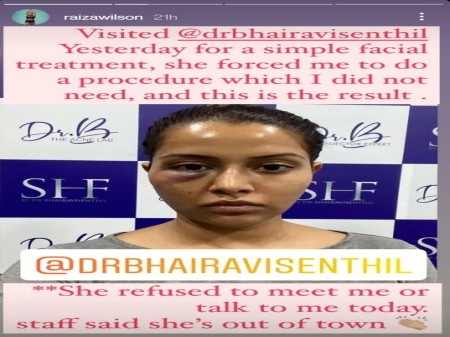 Many people reacted to Raiza and shared their own issues with the same doctor, who allegedly forces her patients for unnecessary procedures. She even named the doctor on her post alongside her pictures from post the surgery. As soon as she shared her experience, her fans started pouring in messages for her. She even shared screenshots of the same on her next story and wrote, "My inbox is flooded with people who have faced similar issues with this doctor, tragic. "On the work front, Raiza began her career by starring in 'Velaiyilla Pattathari 2' featuring Dhanush and Kajol. She even worked opposite Chiyaan Vikram’s son Dhruv Vikram in Arjun Reddy’s Tamil remake called 'Varmaa.'Raiza shot to fame with her appearance in the first season of Bigg Boss Tamil hosted by superstar Kamal Haasan an won many hearts with her lovable character. Speaking about her upcoming projects, it include a list of films like-- Alice, Kadhalikka Yarumillai and Hashtag Love.