On Friday night, Sushmita and Rohman were spotted by the paparazzi in Mumbai. The two took off their masks ...

On Friday night, Sushmita and Rohman were spotted by the paparazzi in Mumbai. The two took off their masks and posed for photos. Rohman was seen in a white shirt and black pants while Sushmita was seen in a black shirt and black pants. However, it was the former beauty queen's appearance that sparked attention. Sushmita's face looked a bit puffy in the pictures and that sparked a lot of botox rumours on social media. One user wrote, "What happened to her face"
Another one commented, "Uffff OMG whats wrng with her face.. "Yet another comment on the post reads, "She still looks so beautiful but She didn’t need" 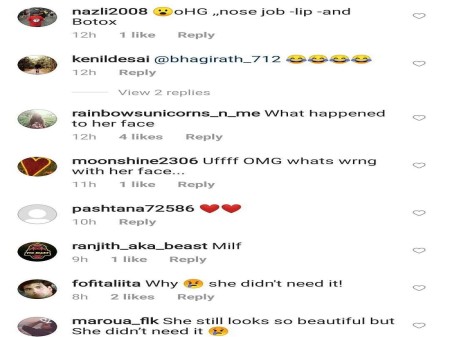 Some even trolled the actress for getting a botox treatment  to make her facial appearance more youthful. On the work front, the actress was last seen in Ram Madhvani's web series ‘Aarya’ last year.The series marked her return to the screen five years after her last release, the 2015 Bengali arthouse release, ‘Nirbaak’. In Bollywood, her last release was Anees Bazmee's 2010 multi-starrer, ‘No Problem’. A few days ago, the actress got her fans a little worried recently when she shared an Instagram post about walking out of a futile relationship. Fans began wondering if she had broken up with her model boyfriend, Rohman Shawl. However, the couple's latest appearance together and still looked very much in love.