The tragic demise of Sushant Singh Rajput on June 14 sent shockwaves across the country and many speculations are ...

The tragic demise of Sushant Singh Rajput on June 14 sent shockwaves across the country and many speculations are doing the rounds ever since the actor breathed his last. While the Mumbai Police is still investigating the case and has recorded over 25 people's statements discussions around the Kedarnath actor's death refuse to die down. Meanwhile, A Facebook post from Suhrita Das' page went viral recently. Suhrita is an associate of Mahesh Bhatt, who had worked with Rhea Chakraborty Sushant's rumoured girlfriend on ‘Jalebi’. In a post dated June 14, Suhrita wrote a message for Rhea and revealed that she used to seek 'counsel from Bhatt Saab' related to Sushant.

“When the world will be pouring grief for Sushant Singh Rajput and expressing shock and condolence I stand by you firm and strong. Having been a silent spectator to your impossible attempts at trying to keep him together and going.... it is my moral duty as a mother and a citizen of this country to tell once and for all that clinical depression is a catastrophe that medical science has no solution or answer to.”

Suhitra went on to add that Rhea would often seek advise from Mahesh Bhatt. “Every time you came running to the office to seek counsel from Bhatt Saab or spoke to him on the phone I’ve seen your journey , your struggle. Cant forget the evening in Sushant’s terrace when it almost felt like everything was normal in the world while deep within he was slipping away. Sir saw that, that’s why he shared the very words his Master UG told him warning him about Parveen Babi, “walk away or this will take you down under along with.” You gave your everything and more, you did more much more than your bit woman. Love you my Jalebi. Stay strong." Suhitra has reportedly deleted this post of hers from Facebook. 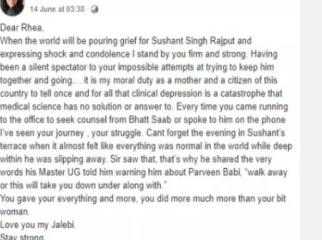