"I will condemn them, not stay silent like Bullywood": Kangana targets Maharashtra government again

Bollywood actor Kangana Ranaut has once again gone out against the ruling Maharashtra government after she defended her state ...

Bollywood actor Kangana Ranaut has once again gone out against the ruling Maharashtra government after she defended her state Himachal Pradesh in her latest tweet. This time, the Queen actress  took to her Twitter handle to emphasize on the fact that Himachal is hosting maximum Mumbai film units, and if anyone gets called ‘Haramkhor’ or ‘Namakharam’ from the ‘God’s Place’, she would strongly condemn. Her tweet went on to read, “Himachal is hosting maximum film units from Mumbai at this point, Dev Bhumi belongs to every Indian and anyone making money from this state won’t be called Haramkhor or Namakharam, if somebody does I will condemn them not stay silent like Bullywood” 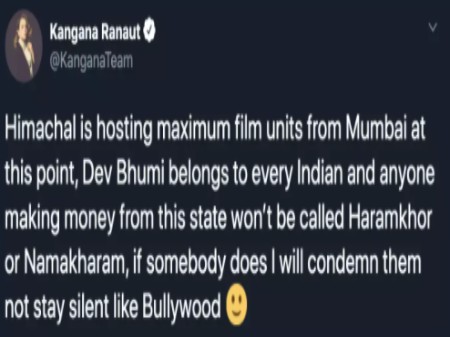 The Gangster actor and the Maharashtra govt have been at loggerheads for quite some time now. The faceoff between the Maha Vikas Aghadi government and Kangana was triggered after the latter had compared Mumbai to Pakistan Occupied Kashmir in the wake of Azaadi graffiti seen on the streets of the city, and the subsequent inaction of the Mumbai Police. Since then, the ‘Queen’ actress has been hitting the headlines for her comments on the Maharashtra govt. On the work front, Kangana Ranaut will be seen in Jayalalitha biopic 'Thalaiva'. Kangana has also wrapped up the reading session for upcoming venture 'Tejas', which is set to start filming in December. In the movie, she would be portraying the role of an air force officer.