Ranbir Kapoor’s team Mumbai City FC has lifted their first-ever Indian Super League trophy after beating last season’s winners ATK Mohun Bagan 2-1 in the final at the Fatorda Stadium in Margao on Saturday. While the actor is currently in home quarantined after having tested COVID 19 positive, his mother Neetu Kapoor attended the match and was also seen lifting the cup with the entire team post their victory. The senior star also took to her social media to congratulate Mumbai City. Neetu took to her Instagram story and shared a photo wherein she can be seen happily posing for the lens. 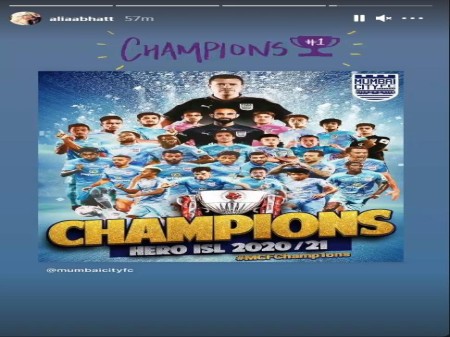 Sharing the photo, she wrote, “@mumbaicityfc champions of 2021.” Ranbir’s girlfriend Alia Bhatt is also over the moon and congratulated the Mumbai City FC on the win. The Raazi star posted the same photo on her gram stories and wrote, “ Wohooooo followed by heart emojis. Alia shared another photo of the team calling them “champions. ”Neetu had earlier confirmed about Ranbir's COVID-19 diagnosis. In a social media post, the veteran actress wrote, “Thank you for your concern and your good wishes. Ranbir has tested positive for Covid-19. He is on medication and recovering well. He is in self quarantine at home and following all precautions.”