"Your love is healing": Rhea Chakraborty thanks fans for the birthday wishes English.Lokmat.com

"Your love is healing": Rhea Chakraborty thanks fans for the birthday wishes

Rhea Chakraborty, who turned a year older on Thursday, has penned a note of gratitude. In a note shared ...

Rhea Chakraborty, who turned a year older on Thursday, has penned a note of gratitude. In a note shared on her Instagram Stories, the actor thanked those who wished her on the occasion. , “Thank you for all your amazing birthday wishes and love, your love is healing.. keep it coming, wrote the actress. Rhea has been in the limelight for all the wrong reasons post the tragic demise of her boyfriend Sushant Singh Rajput. Rhea was s accused of abetment of suicide by the actor's father. 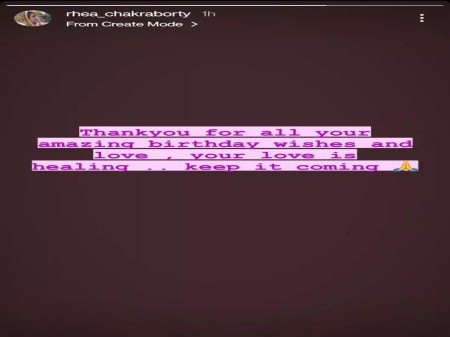 An FIR was filed against the actor, and her family in which she was also accused of stealing the late actor's money. The Enforcement Directorate (ED) and Narcotics Control Bureau (NCB) were also involved in the investigation, probing in the money laundering and drugs angle. Rhea spent close to a month in jail in a drugs-related case. On the work front, Rhea will next be seen in Amitabh Bachchan and Emraan Hashmi starrer ‘Chehre.' Reportedly, she is also in talks for a huge project inspired by the mythological story, Mahabharata where she has been offered the role of female lead Draupadi. The actress is also rumoured to be a part of Big Boss 15.